iOS Automation - Importing Daily Notes to Day One as one entry

I've been trying to think of a way to use my diary app (Day One) a little more often. Usually I find that I either don't have time or I'm too tired to summarize the day before bed.

One idea that I had was to submit bite-sized entries as the day wore on. The shorter the update, the less of a burden it would be to write it and the more likely that an entry would happen.

I chose Day One as it's one of the most popular diary apps on iOS and it supports URL schemes (more on this later...)

The approach that most people would take would be to launch the Day One app, open a new entry... add notes... save... repeat... This works but it would end up creating multiple entries for that day. I was hoping to only have one for the day. The other approach would be to open the relevant entry and keep adding to it but I was hoping to add a timestamp of when I added each comment. To do this, I would have to type in the date and time manually before adding each entry. Sounds like a job for automation!

So I turned to iOS automation using a combination of the following workflow-based applications:
The goal was to prompt me for text, prepend a timestamp to it, add it to a text based note and at the end of the day, automatically send it to Day One and clear the note for the next day.

I must warn you that the following automated workflows may appear to be more convoluted than necessary. I'm sure that there are better ways to accomplish the same thing. This is how I chose to do it. 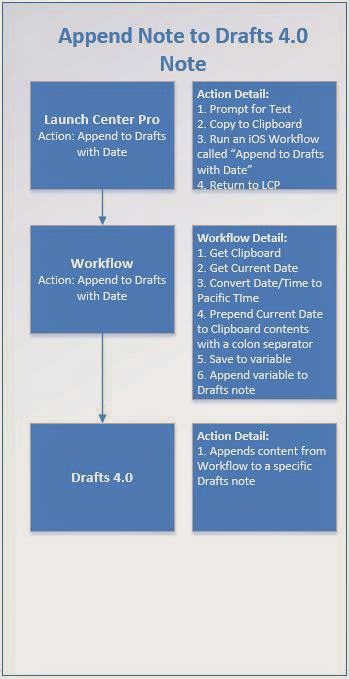 This URL scheme will prompt you for text, send the text to Workflow, run the "Append to Drafts with Date" workflow and return to Launch Center Pro at the end.

Unfortunately, Launch Centre Pro doesn't have the capability to add a timestamp so I had to rely on Workflow instead. I hear that it may be possible with TextExpander but I chose to use this method instead.
This will append an entry to a Drafts 4.0 note prefixed with "YYYY-MM-DD: "

The idea would be run the Launch Center Pro action whenever I wanted to record a bite-sized entry.

2) Scheduling a Task in iOS


It turns out that it is not possible to schedule a task to run at a specific time on its own. The best solution that I was able to come up with was to use IF (formerly known as IFTTT) to send a notification at a specific time which when opened would trigger the relevant action.

If you know of any other way of scheduling a task, please let me know. 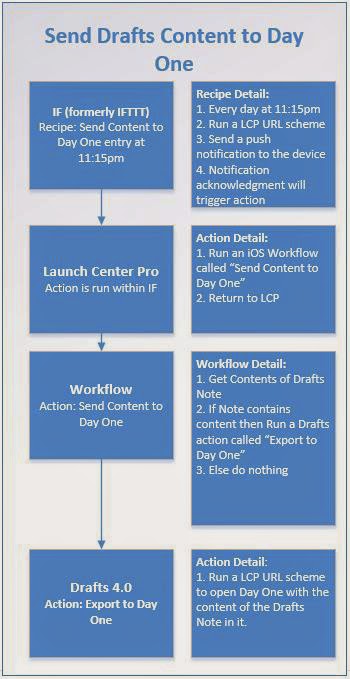 First we start with an action from the IF app.

Unfortunately, it's not possible to include this function in the previous step because Day One does not support x-callback-url URL schemes. These allow you to launch another application, perform and function then then return to the original or another application. Without it, the previous action will open Day One and add the content to a diary entry. The edit window in Day One would remain visible instead of returning to the application that launched the initial request.

If the time of day is 11:30pm then run a Launch Center Pro action.

Although it is a little convoluted, this workflow ends up working quite well for me.

Some of the things that I learned during this experiment:


That's all for now. Let me know if you have any better ways of going about all of this.