Exactly one month from now, we're expecting our first baby... One of the big questions is how this will affect my gaming. This recent article seems particularly relevant:
Not sure if I'm going to get a Wii though...
Posted by Mark Belsito at 2:43 PM No comments:

I've had a chance to play around with the new XBOX experience and I have a few thoughts on it.

Posted by Mark Belsito at 12:49 PM No comments:

It always puts a smile on our face.
Posted by Mark Belsito at 1:08 AM No comments:

A man has successfully flown across the Channel using a jetpack with wings.
Check it out: 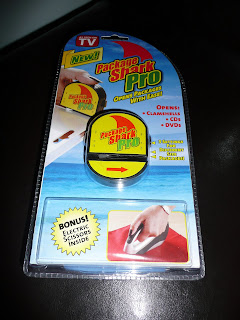 Someone should explain irony to this company...
Posted by Mark Belsito at 12:40 AM 1 comment:

I had a great weekend of birthday celebrations.

We had a group of friends over for a BBQ/Poker/Video Games/Fireworks night on Saturday. It's so nice of those HSBC people to schedule their Celebration of Light around my birthday. We picked some massive (!) ground beef patties at Costco and other brought steak. Barbeques are awesome. The food tastes so much better.

My XBOX 360 red-ringed recently so I had to dig out the old Dreamcast. It was actually quite fun playing old games like Tennis 2K2, Chu Chu Rocket, Crazy Taxi and Super Puzzle Fighter. There were some great games for that system!

Fireworks were okay. The music was horrible and didn't seem to go well with the light show but the variety of fireworks was impressive. I don't think I've ever seen fireworks that high in the sky. Too bad the smoke from the fireworks impeded some of the view of the show.

On Sunday, I went bowling with the family at Grandview Lanes on Commercial Drive. The alley was quite old with some flaky equipment but it didn't deter from the enjoyment. I've always loved bowling although it probably didn't help my thumb which was recently caught in an SUV trunk door... Not fun.

I also experienced a restaurant called "Julio & Me" on Commercial for the first time and I was impressed. I enjoyed the meal although I did feel that the menu could have a few more selections on it. Despite this, the food and service were both excellent.

The weekend was great! Thanks to everyone who made my birthday weekend so much fun!
Posted by Mark Belsito at 11:45 PM No comments:

Welcome To My New Site

After countless years of maintaining a website on my old P3-450 and listening to the constant moan of the dying CPU fan, I finally hear silence! (Is that possible?)

My old server has been put to rest. A part of me feels bad about saying goodbye. It has given me many years of semi-reliable service and helped me to practice web development. But months of neglect has left it needlessly taking up space on the Internet.

I've backed up my website using an awesome application called HTTrack (http://www.httrack.com/) for times when I feel a little nostalgic and want to revisit the past. In addition to the demise of http://www.markbelsito.com/, other sites such as http://www.wayside.ca/ and wedding.belsito.ca have gone by the wayside and will live on only in our memories and my computer.

And so... here I am... transitioning to a hosted web blog. Not ideal but it gets the job done. Hopefully, I'll be able to maintain this site a little better than my previous one... Welcome to the new http://www.markbelsito.com/.
Posted by Mark Belsito at 9:22 PM 1 comment: